Hiro Mashima is famed for reusing his character designs in his works, and he has done it again in  . Hiro Mashima has started his career in 1999 with , which ran until 2005. Just a year after, he went serialized again with . is probably Mashima's greatest creation yet. It has continuously released weekly chapters for more than a decade and has even received an anime adaptation, spin-off series, movies, and . The year after ended, Mashima comes back again with a new title - . It already has more than a hundred chapters and an anime on the way.

Even during , Mashima has already reused some of his character designs from . What sticks out the most, however, is Plue, the bearer of Rave Master stone in and Lucy's Celestial Spirit in  Since then, Plue has somewhat become Mashima's mascot in his works. Plue also makes an appearance in , although it doesn't have as big of a role as it does in and . Just like , Mashima has borrowed quite a few character designs for Of course, some of them have been tweaked here and there. Nonetheless, the semblance between them is uncanny. 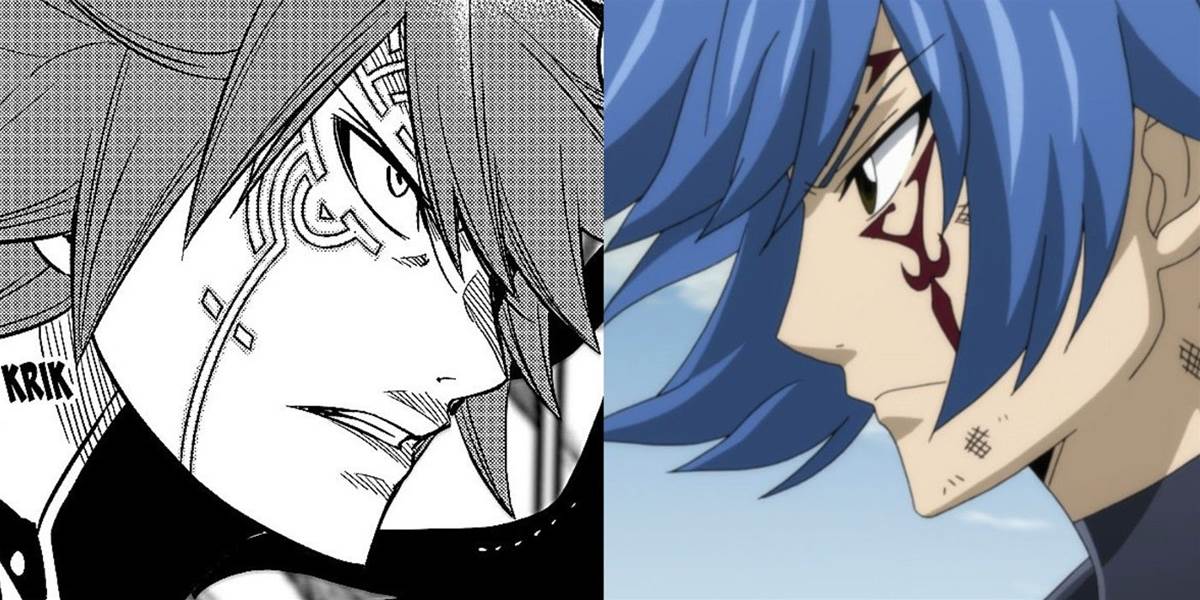 In , Jellal is Erza's childhood friend and love interest. When he , he has also become one of the series villains and has tried to revive Zeref, the strongest mage in the series. Jellal's distinguishing features are his blue hair and the red marks under his right eye. He uses magic called Heavenly Body Magic. He controls the energy of the stars within him and uses it to fight.

Justice is a member of the Interstellar Union Army and is once a prince in the Kaede Cosmos. However, Elsie's actions have caused a civil war on their planet, which eventually leads to Justice and Elsie losing everything. Because of this, both Justice and Elsie have gone separate ways, and Justice has dedicated himself to hunting Elsie, his former fiancee. Justice sports white hair and brown eyes, but his looks change upon activating his Ether Gear. His hair becomes dark, and Ether marks appear around his right eye. Justice's Ether Gear allows him to absorb the energy of the planet. Similar to Jellal, his attacks are Meteor, Grand Chariot, and Antares, although Antares is unique to Justice. 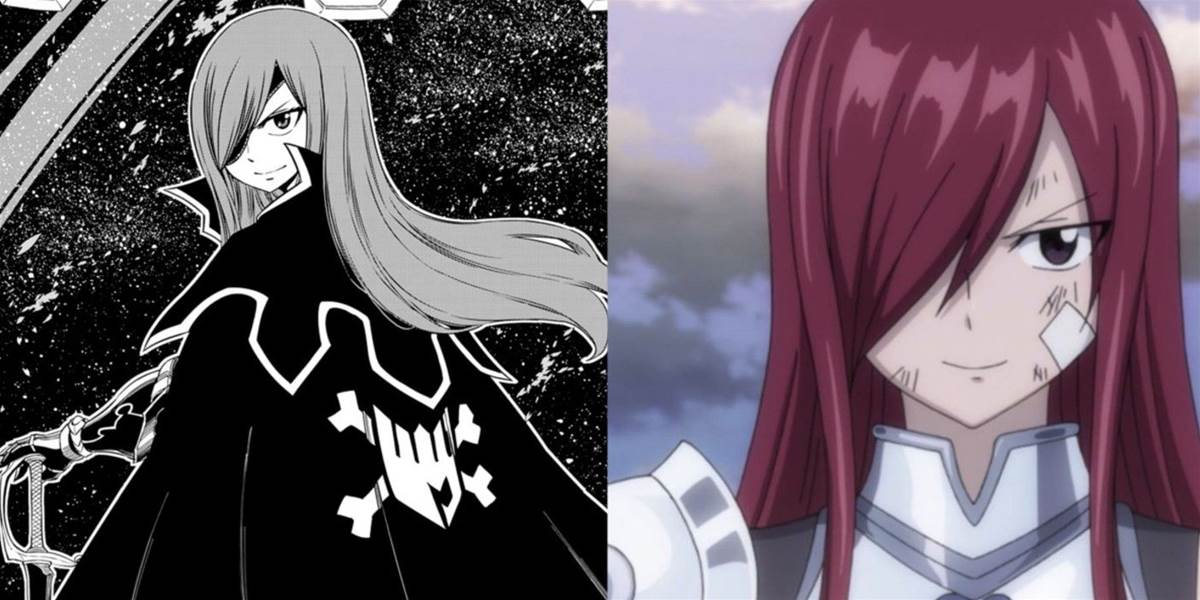 's Erza Scarlet is an S-Class mage who uses her magic to instantly . She has a wide inventory and has a lot of transformations in the series. Erza has long scarlet hair and has lost her right eye during her childhood. Porlyusica has created an artificial eye for her, so she appears to have two eyes in the entire series.

Elsie Crimson is a former princess on a planet in Kaede Cosmos and Justice's former Fiancee. After she runs away from her planet, Ziggy, also known as Demon King, picks her up, and she becomes part of the family. When Ziggy has settled in Granbell, he leaves the Edens Zero in Elsie's care. When the provisions in the ship have run out, she has started to steal everywhere. She is then labeled as a pirate. Her forces grew, and she eventually becomes a member of the Oracion Seis Galactica. Similar to Erza, Elsie has crimson hair and wears an eyepatch on her right eye. She can also absorb the Ether from a planet and use it to create battle gear. 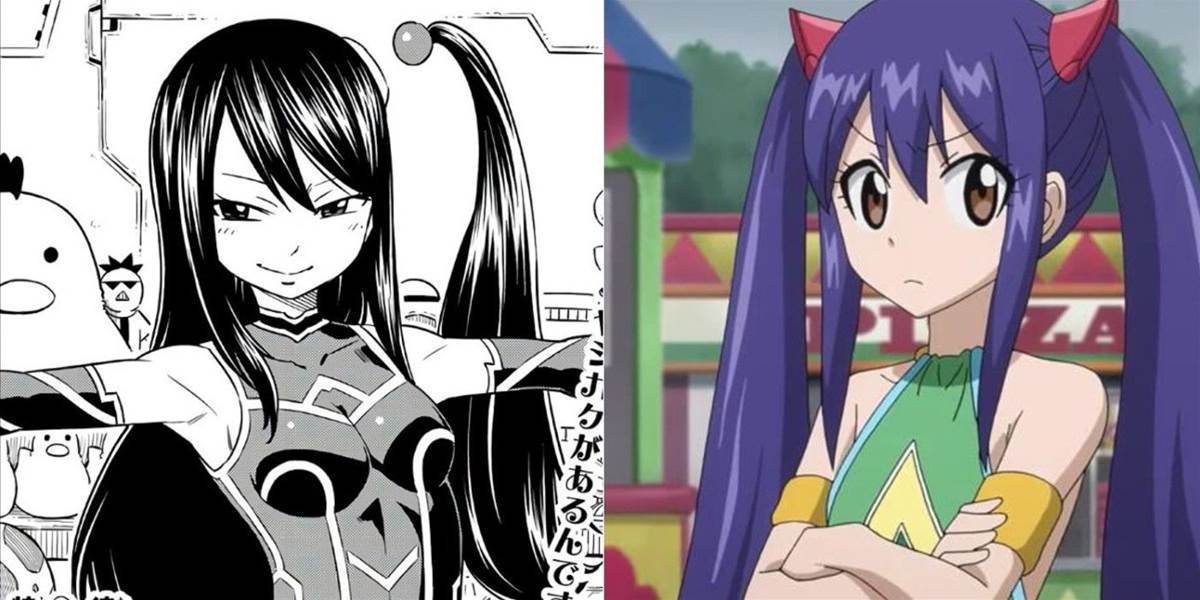 Wendy Marvell is a young Dragon Slayer in . She's a young mage who has been raised by the Sky Dragon, Grandeeney. She eventually joins the Fairy Tail guild and become part of Natsu's gang. Wendy is a petite girl with fair skin and blue hair. 's Labilia Christy, on the other hand, is an esteemed B-Cuber. She's a despicable character who is yet to redeem herself. But even if her personality is nowhere near Wendy's, her looks are basically Wendy's older version. and green eyes. Her common outfit is a skintight black suit with green lines, which is also similar to Wendy's outfit in 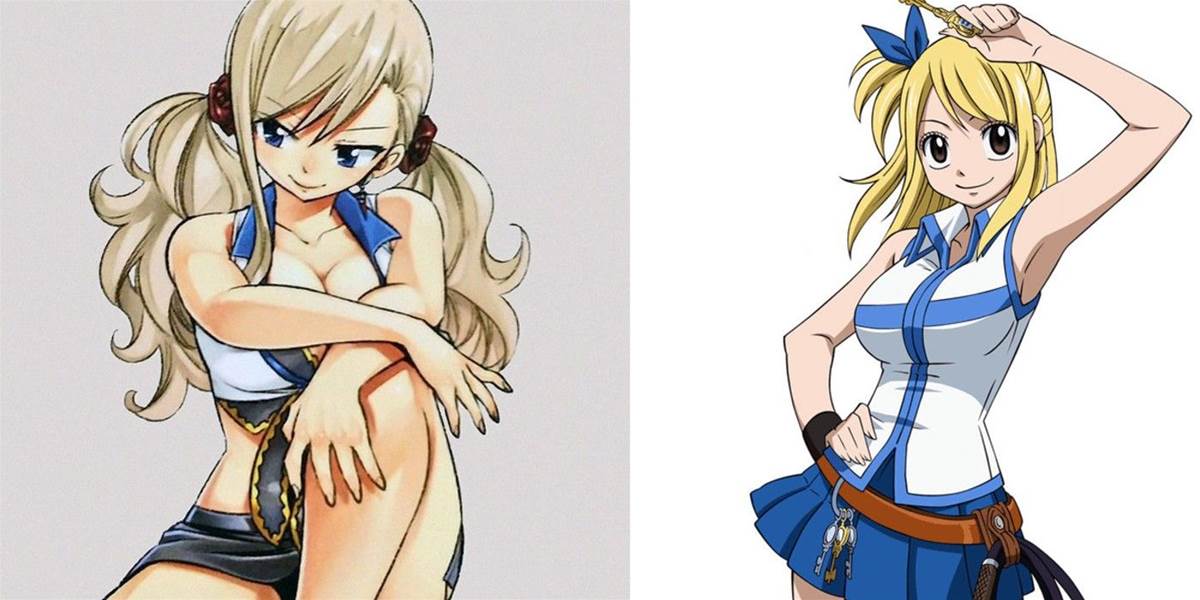 Lucy Heartfilia is 's main heroine. She's a mage from Fairy Tail guild who uses Celestial Spirit Magic. That means she summons Celestial Spirits using the keys to their respective gates. Lucy has long blonde hair, which she usually keeps in a tie on the side, and brown eyes. She's curvaceous and consistently . She wears a sleeveless white collared shirt with a blue skirt. Similarly, Rebecca Bluegarden is also 's main heroine. She's also a B-Cuber like Labilia, but her popularity is nowhere near as good as Labilia's. Her Ether Gear, Cat Leaper, allows her to leap back into time. She has ash-blonde hair that goes down to her waist and large blue eyes. She also sports a similar outfit to Lucy, and even the color scheme is the same. 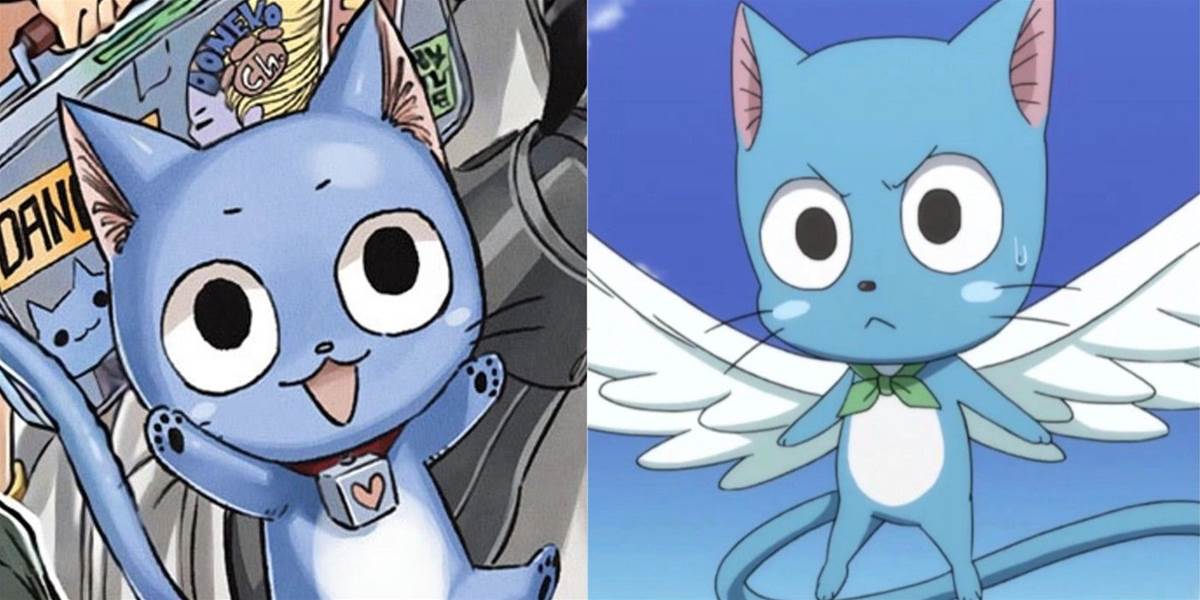 In , Happy is an Exceed, a race of cat-like beings, and is also Natsu's best friend. Being an Exceed, Happy can naturally use magic. However, his magic ends at sprouting wings and flying. Nonetheless, his companionship proves to be crucial during Natsu's adventures. The Happy in  has, unfortunately, . He is Rebecca's companion who has accompanied her ever since. Professor Weisz uses his intellect to transfer Happy's brain into a machine, turning him into a robot. But he isn't just a companion robot, Happy can transform into a pair of blasters that can fire Ether bullets. Paired with Rebecca's aim, they prove to be a formidable pair.