Warning: SPOILERS for One-Punch Man chapter #173 has finally unveiled the truth about the S-Class Rank 1 hero, Blast, and his relationship with . As it turns out, the reason for Blast's continued absence from the Hero Association is that he has been fighting a secret war against God since encountering the powerful creature years ago.

Blast has been one of the most intriguing characters in since he was first name-dropped in the series. As the highest-ranking hero in the Hero Association, Blast is supposed to be the ultimate line of defense against monsters and other calamities. Instead, he has been absent from duty for 20 years. , in the middle of the battle between the Hero and the Monster Associations, it was immediately clear that he has a connection with God, the ominous, enigmatic villain that can transform regular humans into monsters by offering a dark bargain. Blast got caught in the middle of the Earth-shattering battle between Saitama and Garou, so , until now.

Chapter #173 of eschews the action in favor of a long but satisfying exposition sequence, in which one of the senior executives of the Hero Association, Sitch, reveals to a small group of selected heroes that he has been aware of God's existence for 20 years. , together with a still unnamed partner, started researching mysterious cubes that could turn humans into monsters, learning that they acted as a communication device with another dimension, where God resides. The first contact with this creature happened when Blast fought the monster Elder Centipede. God offered the number 1 hero his power, which Blast refused, and from that moment onwards he embarked on a crusade to stop God's influence from spreading into the human world. The reason why Blast disappeared is that he believed it would be safer if only a small group of people knew about God, so he started a one-man war to keep everyone else safe. 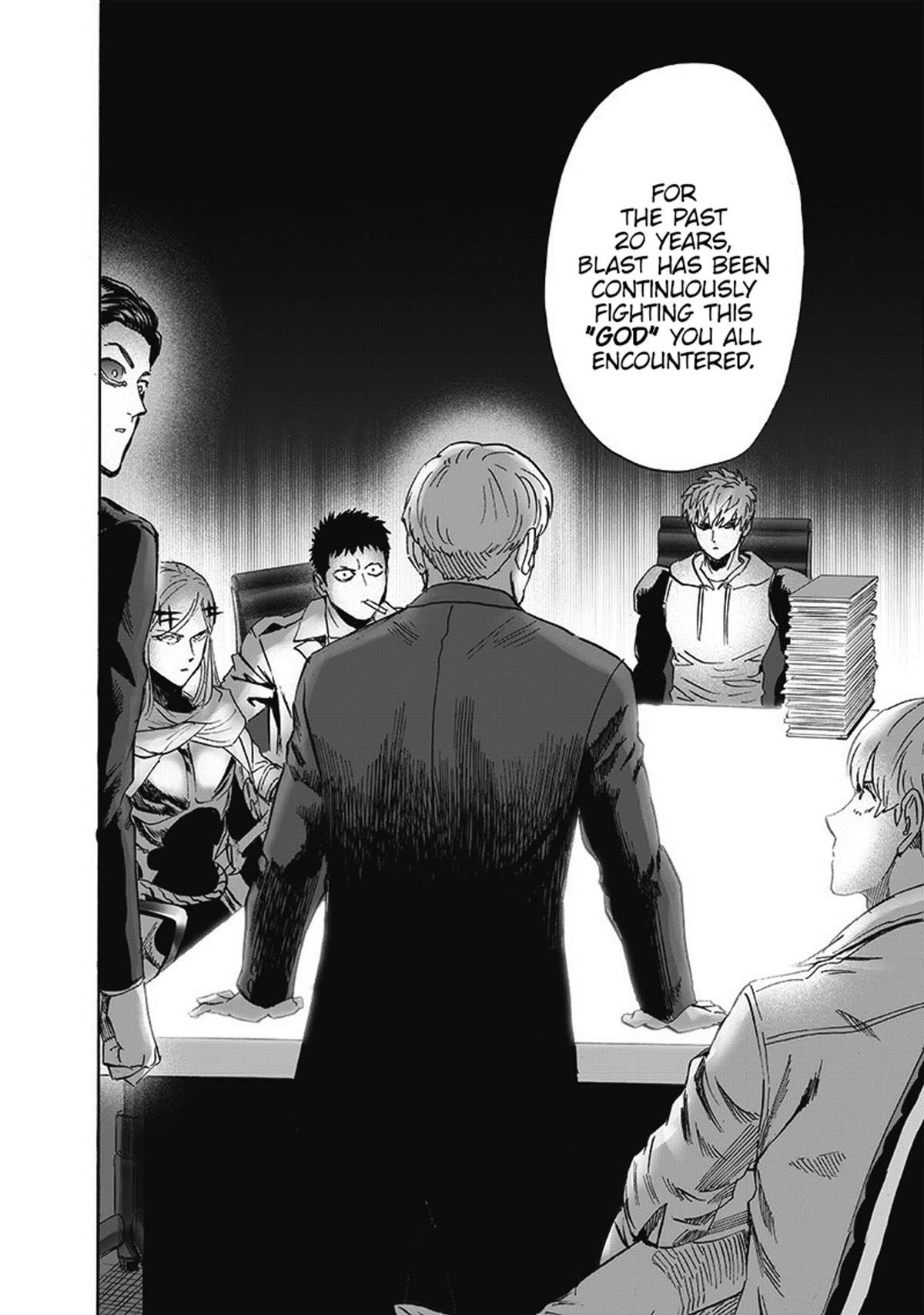 Readers know, from a few chapters ago, that . He has recruited a group of powerful allies, including aliens, to help him in his fight against God. What is most interesting is that Sitch says that the reason why only Blast is capable of fighting God, among the heroes of Earth, is his ability to manipulate space-time. The other members of his group also displayed the ability to manipulate space-time, when they helped Blast redirect away from Earth . Based on the other clues shown in the series, then, Sitch's words confirm that God is likely trapped in another dimension, and he is able to interact with the outside only through his cubes or the vessels that accept his power.

The manga is making the character of Blast more and more interesting, especially compared to the original webcomic where he does not even appear. The next time that Blast appears, the manga will have to reveal if he remembers witnessing Saitama's battle against Garou, and . If this is the case, Blast will surely try to recruit Saitama in his secret crusade against God, which will definitively be a new, intriguing development for the story of ​​​​​​.