With wrapping up, fans saw an explosive conclusion that saw Jennifer Walter write the ending to her own show. However, she also introduced several new characters that might steer the direction of the Marvel Cinematic Universe in new directions. The big stinger of the last episode being Hulk revealing Skaar to be his child.

It has long been theorized that might be teasing us toward ,and it looks like the finale for the season might have laid the seeds since Skaar was revealed to be Bruce's son. So, with the Marvel Cinematic Universe now having a Hulk family, let's take a look at how Skaar might set up the story of

With the appearance of Skaar in it has been established that the Marvel Cinematic Universe will be adding their own touch to the storyline. First appearing in in November 2007, Skaar is the son of Hulk and .

When Caiera dies during due to Hulk's ship blowing up and taking out an entire city, Skaar makes it out alive after being in a cocoon during the explosion. Appearing fully grown out of it a year later, he has tattoos burned into his skin by the Shadow People as Old Sam raises and teaches him.

He is eventually exiled to Earth, as Mr. Fantastic and She-Hulk look after his safe passage through a wormhole. He lands in Ohio, the birthplace of Bruce Banner, and later takes out an helicopter as it kills a coyote. He soon finds himself in a battle against and the , with Invisible Woman not joining since she was busy distracting her father miles away.

Skaar then slowly turns to his human form. However, he transforms back into his Hulk version again when an officer takes him as a threat and tazes him. This makes Bruce sense his presence, who was in the Green Scar version of his Hulk, and quickly goes off to fight him.

Skaar then reveals that he wants to kill his father as he feels abandoned by him. However, seeing what his father had turned into, he decides to give up as his low intelligence made Skaar realize that he won't even understand who he is.

The two end up burning bridges when Banner's ability to turn into the Hulk gets taken away by the . Given the events surrounding 'sfinale, it looks like Marvel Studios may have different plans as of now. This conviction is proven by how the majority of the comic storyline has already been skipped by MCU, with Bruce and Skaar already on good terms.

The storyline may also have some huge changes because Skaar has a heavy hand in it and almost kills Hulk during the storyline. However, with the Sakaar plot already being filtered out, the beginning could be quite different.

It remains to be seen what might take place as this is just the start of yet another saga. Here is to hoping that fans will see Skaar in the MCU soon. Until then, interested Marvel aficionados can stream the entirety of on Disney+ Hotstar. 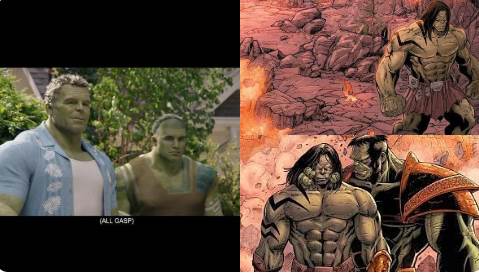