Warning: SPOILERS for Chainsaw Man episode 4 and possibly episode 5A new scene in the anime that never appeared in the original manga provides more foreshadowing for a soon-to-be-identified major villain.

This isn't the first time that the anime has strayed from its main influence for the better. In fact, where Denji is rushing towards an eerie-looking door doesn't happen in the manga until chapter 38, and the anime has only adapted up to chapter 11 as of episode four. Even though the manga itself never revealed the truth behind what lay behind that door until chapter 82, the creative decision of anime studio MAPPA to introduce this mystery at the very beginning of just increases the overall suspense for anime-only viewers that readers initially experienced years ago.

Now in episode four of the anime, adds a completely new scene where devil hunter Aki reports to his superior Makima about Denji and Power's entanglements with the Bat and Leech devils. During his report, Aki mentions there were no traces of Gun flesh in either of the devils' heads. Even though only manga readers know exactly what Aki is referring to, anime-only viewers who paid close attention to the subtitles would have noticed that the word "gun" in "gun flesh" was capitalized, hinting that Aki is referencing something special and not just a normal phenomenon like gun residue.

Why Aki's Comment is so Important to Chainsaw Man Fans 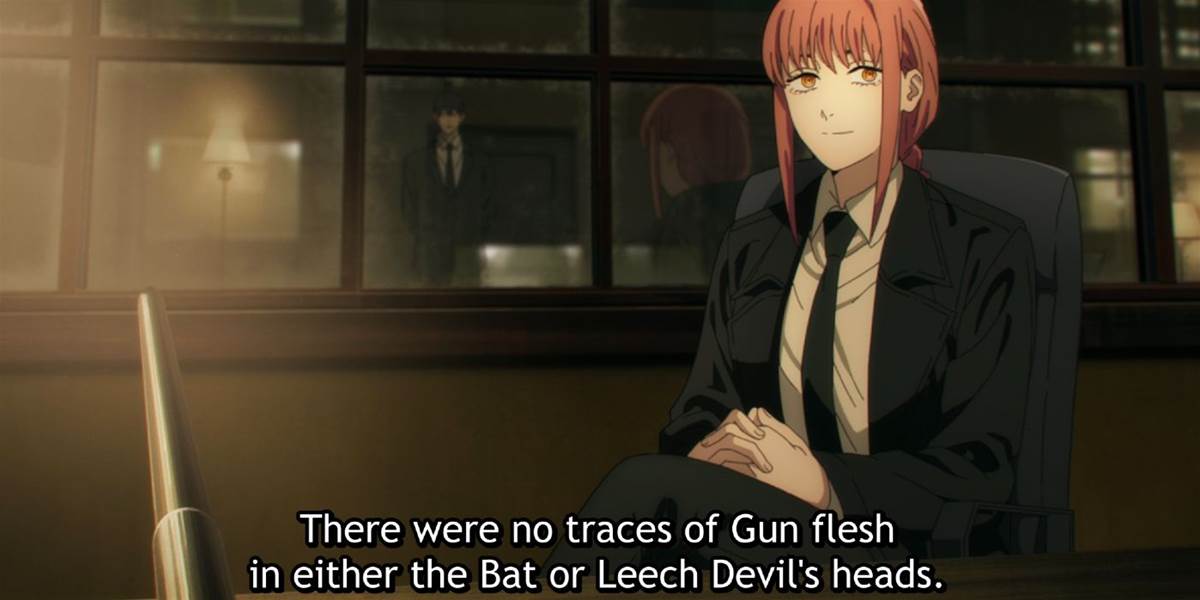 Of course, this is just a minor instance of foreshadowing, so if the anime doesn't add or skip anything next week, then episode five will explain what Aki meant by "Gun flesh." So even though his comment isn't the most drastic instance of foreshadowing, it's still an effective plot point that gives something fun for manga readers to enjoy while introducing additional suspense for especially vigilant anime-only viewers. Regardless, it makes perfect sense that Aki would report this to Makima since one of the devil hunters' major goals is to gather this so-called Gun flesh for a currently yet-to-be-determined reason (that, incidentally, ). Aki, anime-only viewers will soon discover, is especially keen on finding this type of flesh as are many other devil hunters. And as manga readers already know, Makima will later make it Denji's number-one priority going forward.

This latest deviation, especially when paired with the series' opening scene, gives manga readers hope that the anime will continue this exciting trend of leaving little Easter eggs not present in the manga like Aki's ostensibly unimportant comment about Gun flesh. Even if studio MAPPA made the unlikely move of not leaving any additional hints like this in future episodes, manga readers will still enjoy the anime immensely. MAPPA is unequivocally doing the manga justice in more ways than one, especially with how utterly wonderful it has been portraying the and the overly rambunctious and manipulative Power.