When fans think of the differences between and , the fighters’ respective outlooks during a battle usually come to mind as Goku is much more laid back and excited while fighting whereas Vegeta is extremely focused and takes things more seriously. However, those seemingly stapled personality traits couldn’t be further from what was exhibited by the two Saiyans during their very first fight—making it the opposite of what current fans would expect.

Goku made hisdebut in the series’ very first chapter, but Vegeta didn’t come along until more than two hundred chapters later. While Goku was saving the world from the likes of humanoid-bunny crime bosses, fascist regimes, and one demon king, Vegeta was off traveling the cosmos and conquering worlds in the name of Lord Frieza. Throughout his travels, while trying to live up to the name of the Saiyan Prince despite the fact that his entire planet was destroyed and his species was all but extinct. Vegeta became the most powerful Saiyan of the few surviving warriors, including his partners Raditz and Nappa. That is, until he came across another Saiyan who had been living on Planet Earth his whole life—the proven warrior and strongest fighter on the planet, Goku.

In chapter 228 by Akira Toriyama, Goku has returned to Earth after training with King Kai on his world and is facing off against Vegeta for the first time in history. follows his battle with Nappa during which Goku was able to defeat the villainous Saiyan fairly quickly and easily. Goku’s victory made him go into his fight with Vegeta with some confidence even though he knew that Vegeta was more powerful than Nappa. However, Vegeta quickly reminded him who the superior Saiyan was in this first battle, and he did so with a smile on his face. 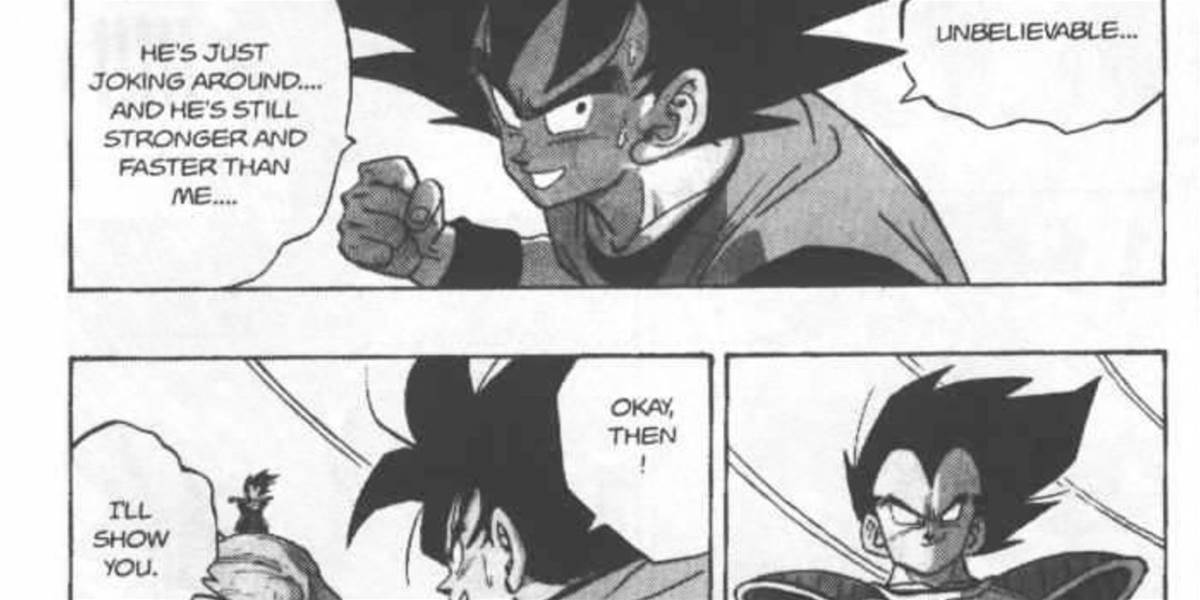 In the years that followed this battle, Vegeta is a serious and focused fighter in every fight he’s in, and he never wastes time playing with his opponent especially when he wants them to die as quickly as possible. This fighting mentality is the exact opposite of Goku who loves easing into his battles no matter who they’re against, partly because he wants to study their movements, but mostly because he enjoys fighting so much that he wants to prolong the experience. as shown in this chapter, however, depicted Vegeta joking around during the battle as he played with Goku and took his time while fighting him rather than unleashing his full might and potentially ending the earthbound Saiyan immediately. Goku, on the other hand, was initially frustrated as he was less interested in getting stronger and more concerned with protecting his son, his friends, and his planet.

While, at first, Goku hated that , he quickly fell into his long-standing habit of getting excited during a fight. However, Vegeta’s attitude didn’t change at all which is still a departure from how readers have seen him during battle in subsequent storylines. Even with Goku falling into his usual mentality, Vegeta joking around with him during a fight is the last thing fans would expect to see especially during the first ever battle between these iconic rivals.