The second part of may be incorporating one of the best elements of the manga's first part in an exciting new way. The second part of the manga has been quite different from what fans initially expected, with series author Tatsuki Fujimoto choosing to feature a new protagonist Asa Mitaka instead of the first part's Denji. But despite being very different from Denji, the manga's latest chapter implies that Asa shares an insidious similarity with him.

Throughout Part 1, Denji would see a vision of a mysterious door that he was warned not to open. Of course this door also became a recurring motif outside his visions as well, with door opening being tied to the . But the door in his vision was actually a mental block preventing him from remembering his most tragic memory, the fact that he killed his father. Seeing what lay behind this door was one of the many things that broke his will and pushed him to become Makima's dog near the end of Part 1, but before that it also served as one of the manga's biggest mysteries. Now Part 2 seems to be introducing its own version of this mystery.

In Chapter 110 Asa has a nightmare about stumbling down a dark alley full of dead chickens. She tries to avoid stepping on the chickens, but they become more numerous as she walks further down the alley towards utter darkness. The chickens likely represent her guilt over . But just as she is about to reach the end of the alley and see what's obscured by the shadows, she wakes up. This is just like how Denji would wake up before he could open the door whenever he would have his nightmare. As if to remind fans further of Denji's door, Fujimoto shows Asa opening a door at the end of the chapter, but with no immediately tragic consequence.

Chainsaw Man is Giving Asa Her Own Version of Denji's Door 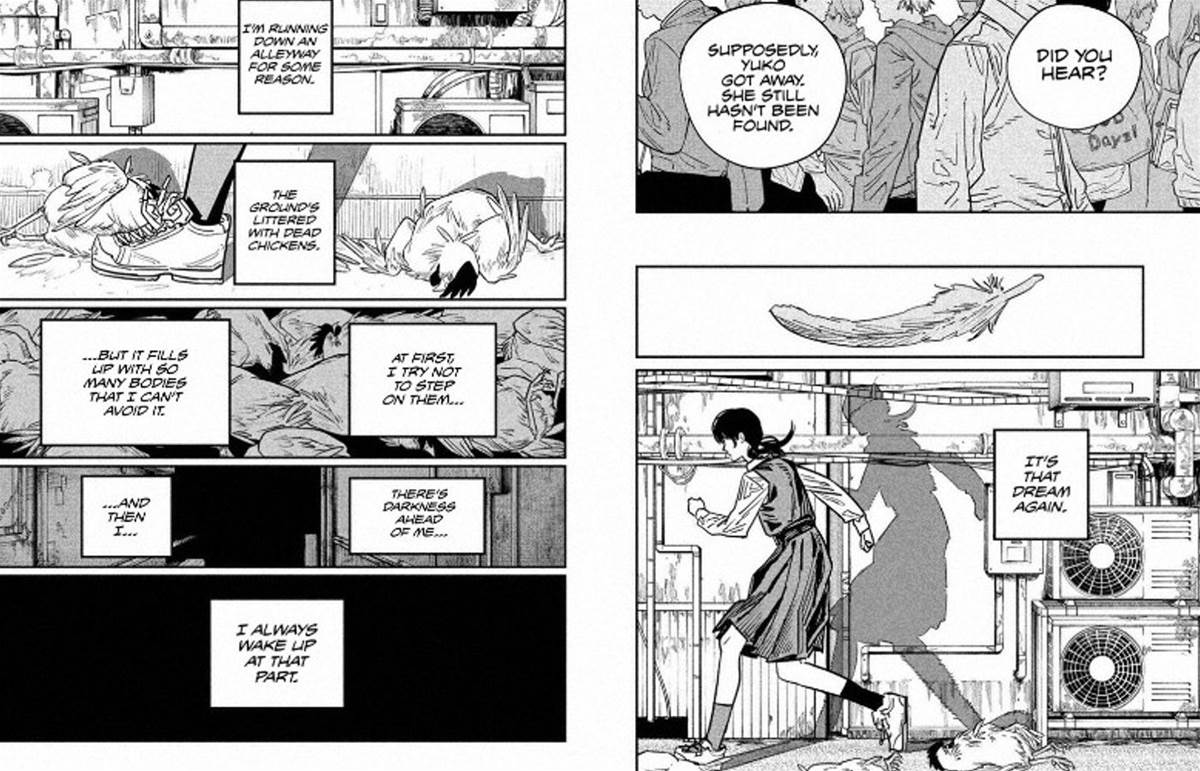 Given how the chickens multiply as she moves further down the alley, the darkness Asa is heading towards likely represents a repressed memory of her ultimate guilt, just like Denji's door. Given that both of her parents died in a devil attack, she may be repressing a memory of her being partially responsible for their deaths. Or, given that now, it may even be a memory of the War Devil that she doesnt want Asa to see, given that Yoru is literally her darker half and that darkness is concealing the end of the alley. It will also be interesting to see if tragic events begin occurring to her in alleys outside of her dream like how doors became tragic for Denji.

No matter what lies at the end of the alley, the similarities to Denji's door in the first part are abundantly clear. It remains to be seen whether this Alley dream will appear again, but it would be a shame if . Having a new version of Denji's Door in the second part both ties 's two protagonists closer together and also presents a new mystery for fans to speculate over and theorize about.